Log in Register
What's new
You are using an out of date browser. It may not display this or other websites correctly.
You should upgrade or use an alternative browser. 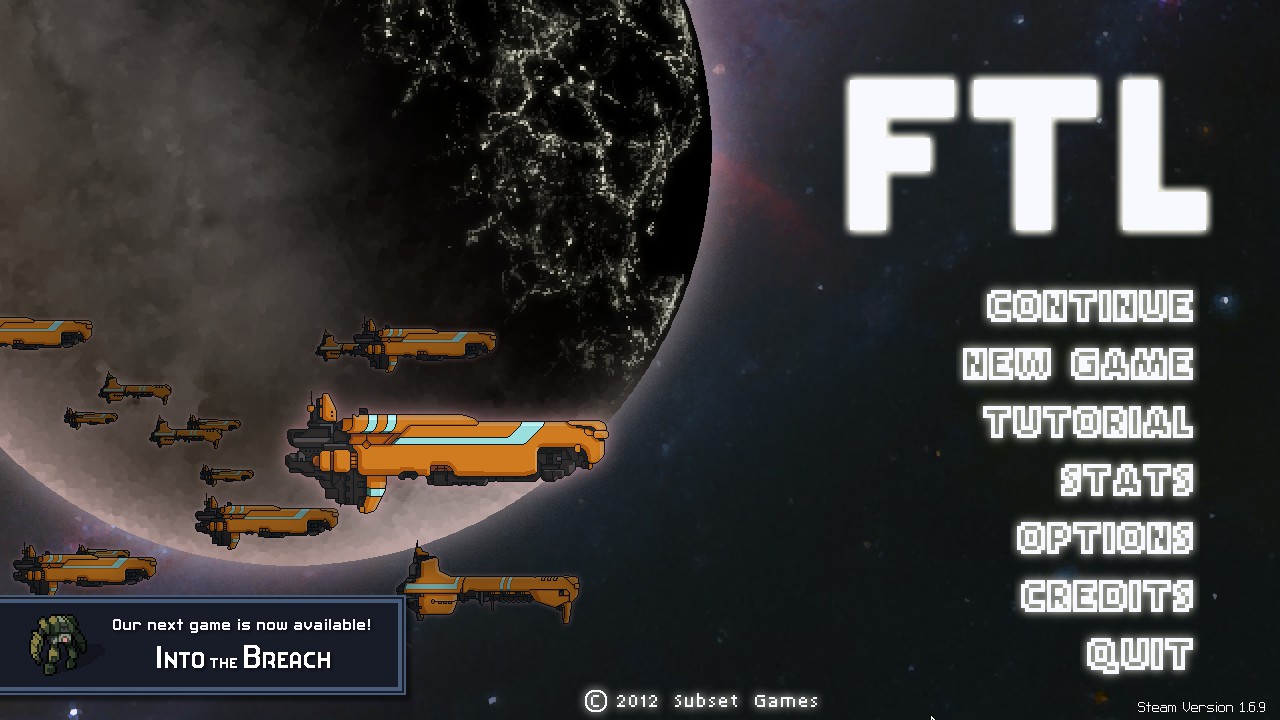 Well, I noticed that this place still didn't have any game reviews . And, since I had a game review lying around that I wrote a while back... I thought perhaps I ought to make it the first review to be posted on Revillution! So, here we go:


What is this game?​
FTL: Faster than Light is an indie game developed by Subset Studios. The original edition was released on 14th September 2012, and the 'Advanced Edition' was released in April 2014 (as a free expansion pack, adding more mechanics and content). Myself, I got it in December 2014, and since then, I've accumulated 527 hours on it on my Steam account.

The plot of the game is pretty simple. The Galactic Federation is currently fighting a war against a xenophobic rebellion, and it's not going well: the Rebel fleet is rapidly advancing on the Federation. However, there is a glimmer of hope: one Federation ship has intercepted a data packet, which could give the Federation the information they need to re-group and win the war. You'll be taking control of this ship: you'll need to stay ahead of the Rebel fleet, battle through the enemies that lurk in deep space, and eventually face off against the Rebel Flagship!

That's really it: this game is not heavy on story .


How do I play?​
You start out in a hangar, where you need to need to pick your ship. Each ship has different starting weapons: for example, some have lasers, some have missiles, and some have ion weapons. Furthermore, each ship has different starting systems: some have a cloaking device, or a crew teleporter, and the Advanced Edition adds a mind-control device . Also, each ship starts with between one and four crew members: there are several different races, each of which has its own strengths and weaknesses. Finally, a few ships start with 'augmentations', which confer additional passive bonuses and abilities (such as an 'automated reloader', which makes your weapons reload faster).

There are 16 ships in all in the standard Edition (the Advanced Edition takes this up to 28). However, there's only one unlocked at the start of the game - the Kestrel: 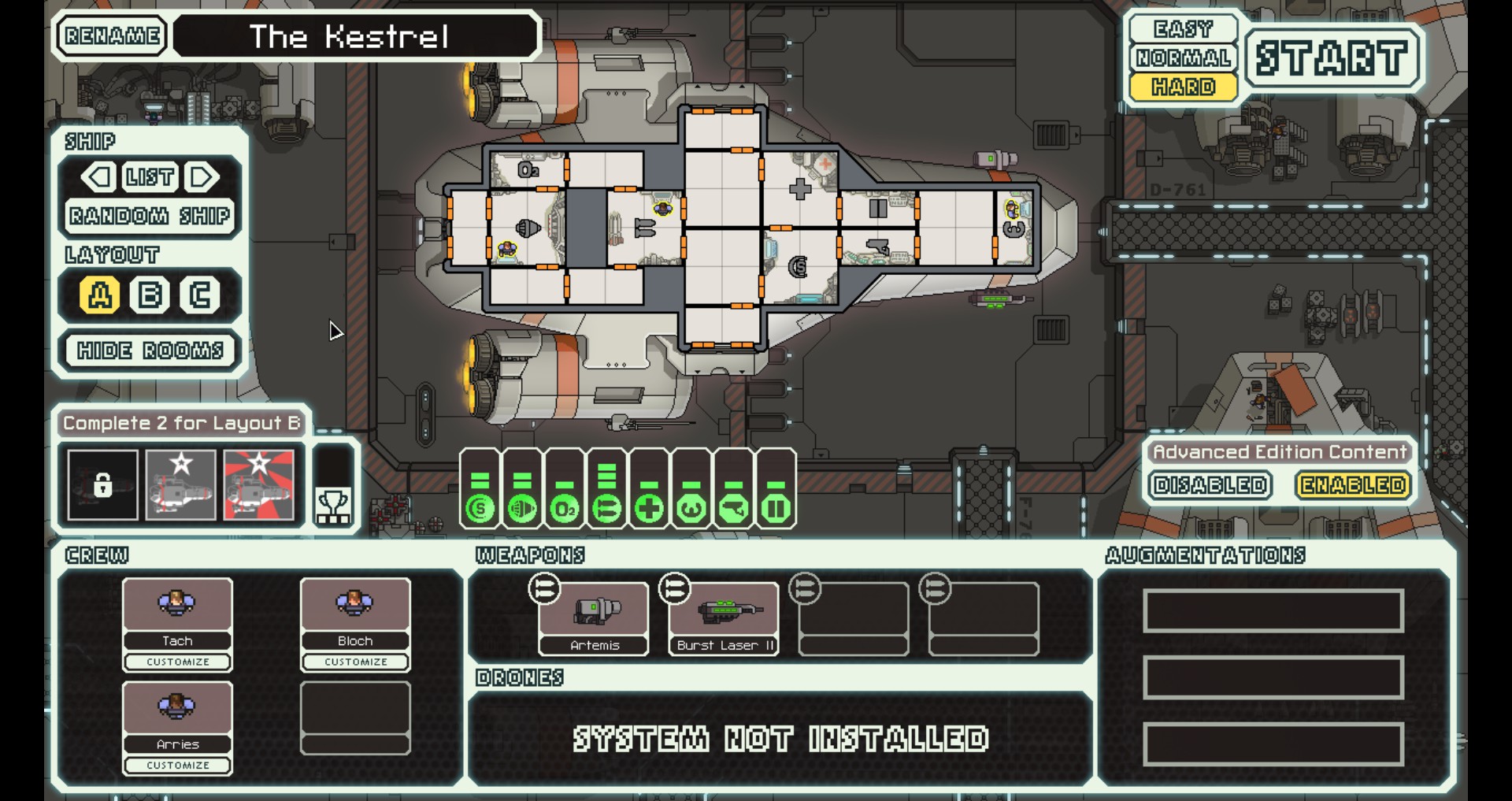 This is a decent ship: two starting weapons, and three starting humans as crew. It doesn't start with any special systems or augmentations, but that's probably a good thing: it keeps things simple for loading the game .

You may also notice in the top-right that this is where you pick your difficulty level. The game calls them "Easy", "Normal" and "Hard" - but, in reality, they should be called "Hard", "Harder", and "Hardest" . Naturally, I'm gonna go straight in with the 'Hard' difficulty here .

So, once we're out of the hangar, it's time for me to introduce the world map: 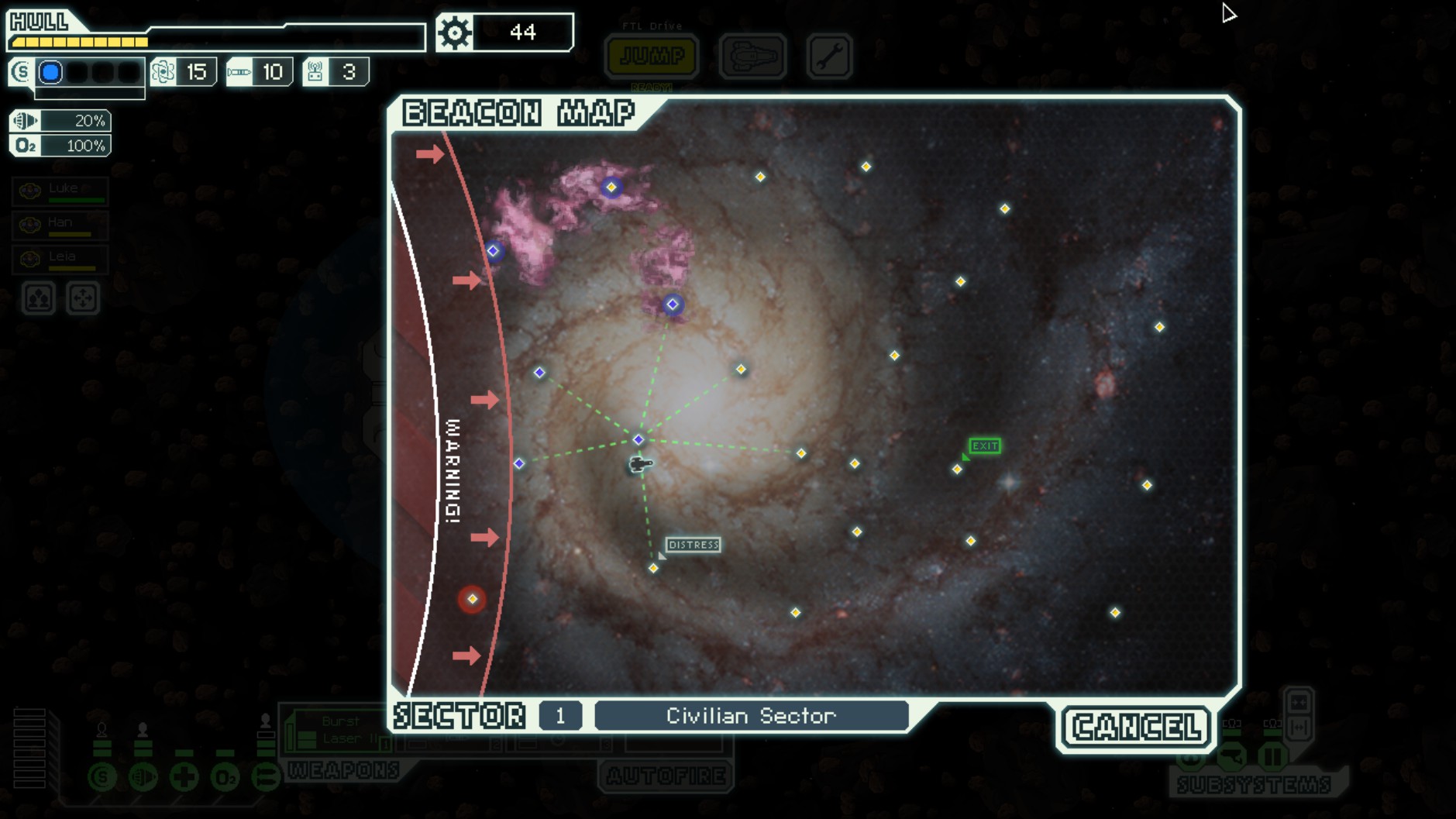 It's a set of beacons, marking locations in deep space. The little ship marker shows where I currently am; the green lines show which beacons I can reach; and the big 'WARNING' sign on the left shows how far behind me the rebels are. I'll need to make it to the 'Exit' beacon on the right before they get there (and, in total, I'll need to make it across eight of these maps in order to win the game).

However, most of these beacons will contain an enemy ship. Which gives me a good chance to show off the combat : 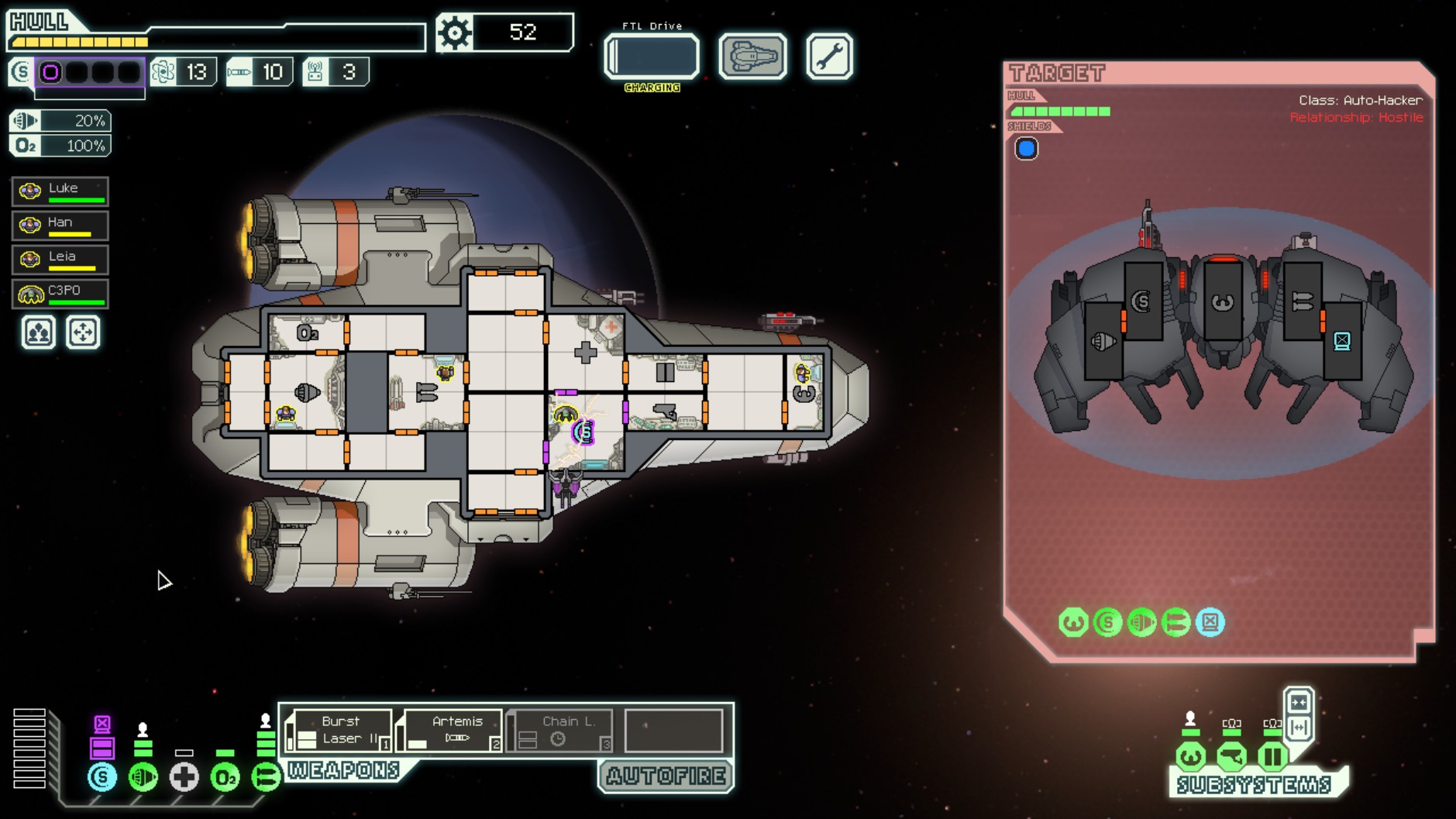 Here, I'm fighting against an "Auto-Hacker", fitted with a hacking device which can disable one of the systems on my ship. Here, this jerk has gone after my shields, leaving my ship exposed

Fortunately, I can fight back. I have the two weapons I started with, plus a third that I picked up in a previous battle. Here, I've chosen to activate my Burst Laser II and my Artermis Missile (sadly, I can't run all three weapons at once: I need 5 power bars in order to do that, and my weapons system can only take 3 power bars ). I've also got 2 power bars going into my engines system, which gives me a 20% chance of dodging any enemy shots (this is the percentage near the top-left of the screen).

Right now, I'm just waiting for my ship's weapons to charge. Not a comfortable situation to be in when my ship has no shields, but when they do charge, I'll be able to strike back

. My laser will fire off a volley of three laser shots, while my Artemis will fire a single missile - so, that's four shots in all that my enemy will need to deal with!

This first volley knocked out the enemy's weapons system. From there, I was able to chip away at the rest of the ship - until it collapsed in a fireball. (Don't worry, this is an auto ship, so no crew were killed in this explosion ): 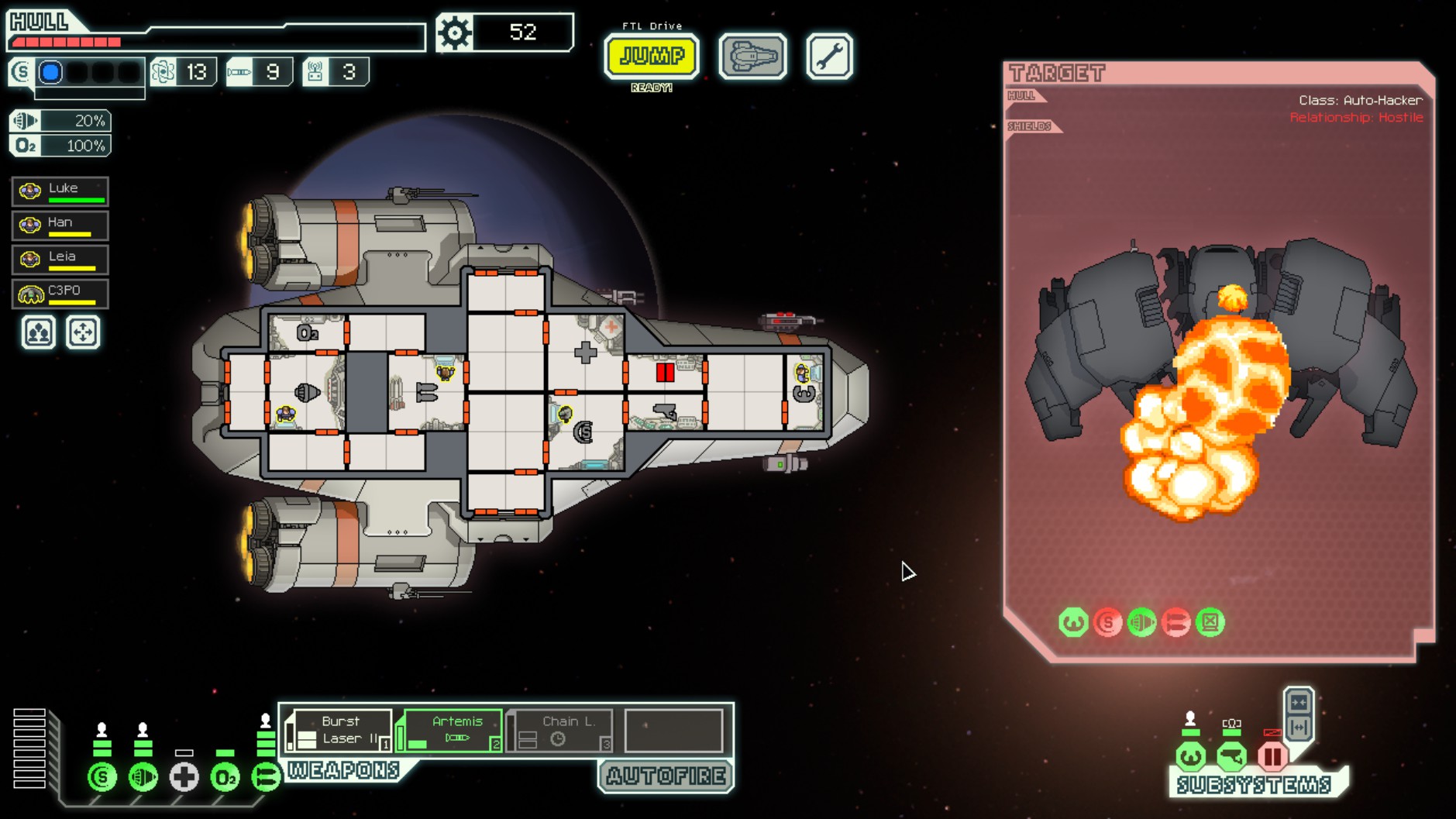 This victory yielded some nice rewards. I got 19 pieces of Scrap, as well as a Fire Beam 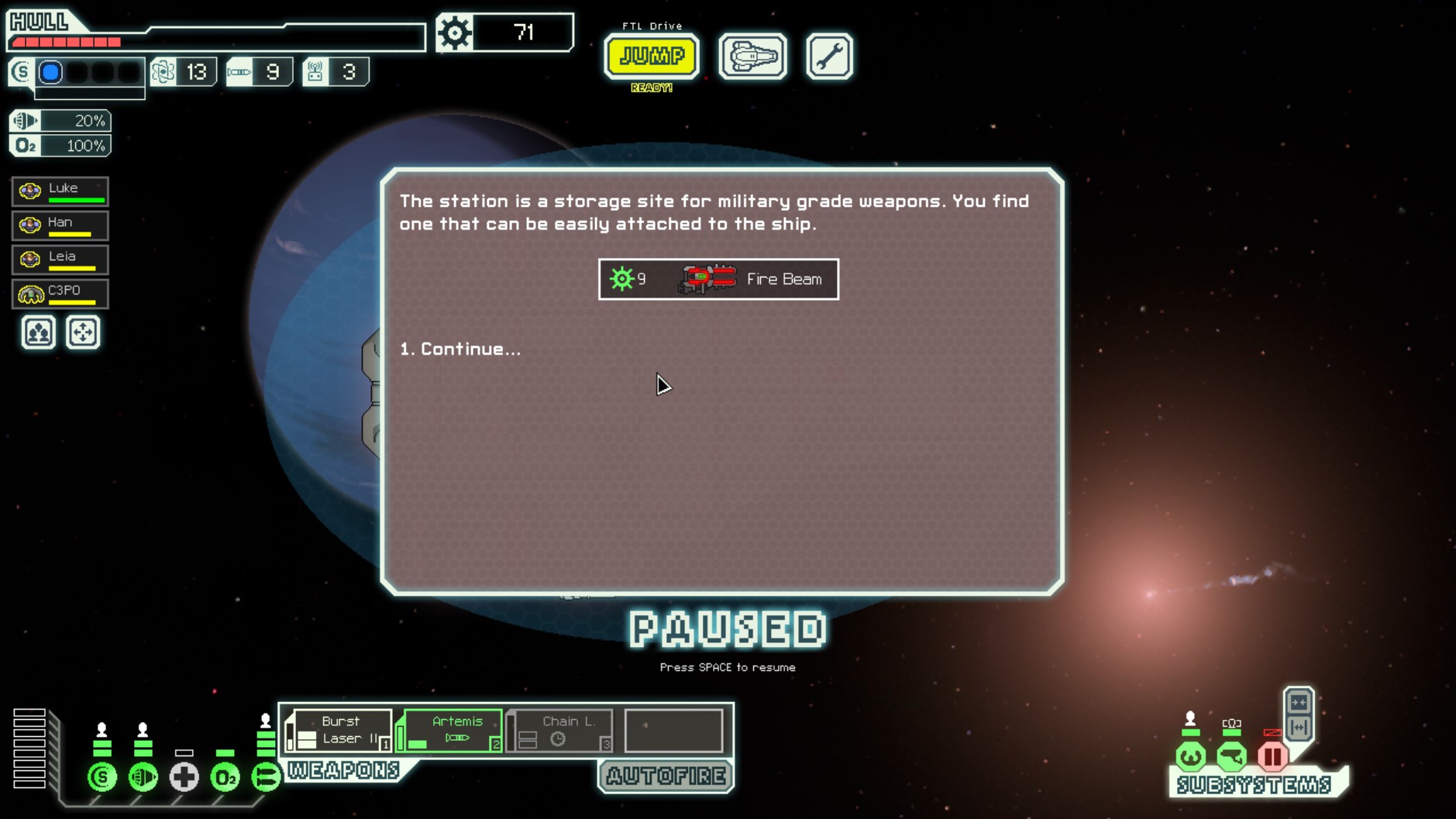 The Scrap is rather important: it's this game's currency. At stores, you can spend it on new weapons, systems, crew, and augmentations, and replenish any consumables that you're running low on (such as fuel). Or, between battles, you can upgrade your ship's systems (for example, I could upgrade my weapons system so that I can run all three weapons at once - or, I could upgrade my ship's reactor with more Power Bars, so that I can run more systems at once.

So, those are the basics of FTL gameplay . I'll be happy to take questions about specifics, but I think it's time for me to move on to my personal opinions:


What do I think of the game?​
I think there's plenty to like about it ! The battles, in particular, are always fun and intense: with weapons firing every few seconds, there are never any 'lulls' where the game gets boring. That doesn't mean you're likely to be overwhelmed, though: the game can be paused at any time, and you can still perform actions when it's paused, so you can always give yourself as much thinking time as you need. Furthermore, the range of opponents, quests and hazards is diverse enough to keep the gameplay from getting too repetitive (for example, you'll sometimes get battles taking place very close to a nearby sun, which can set fires on your ship 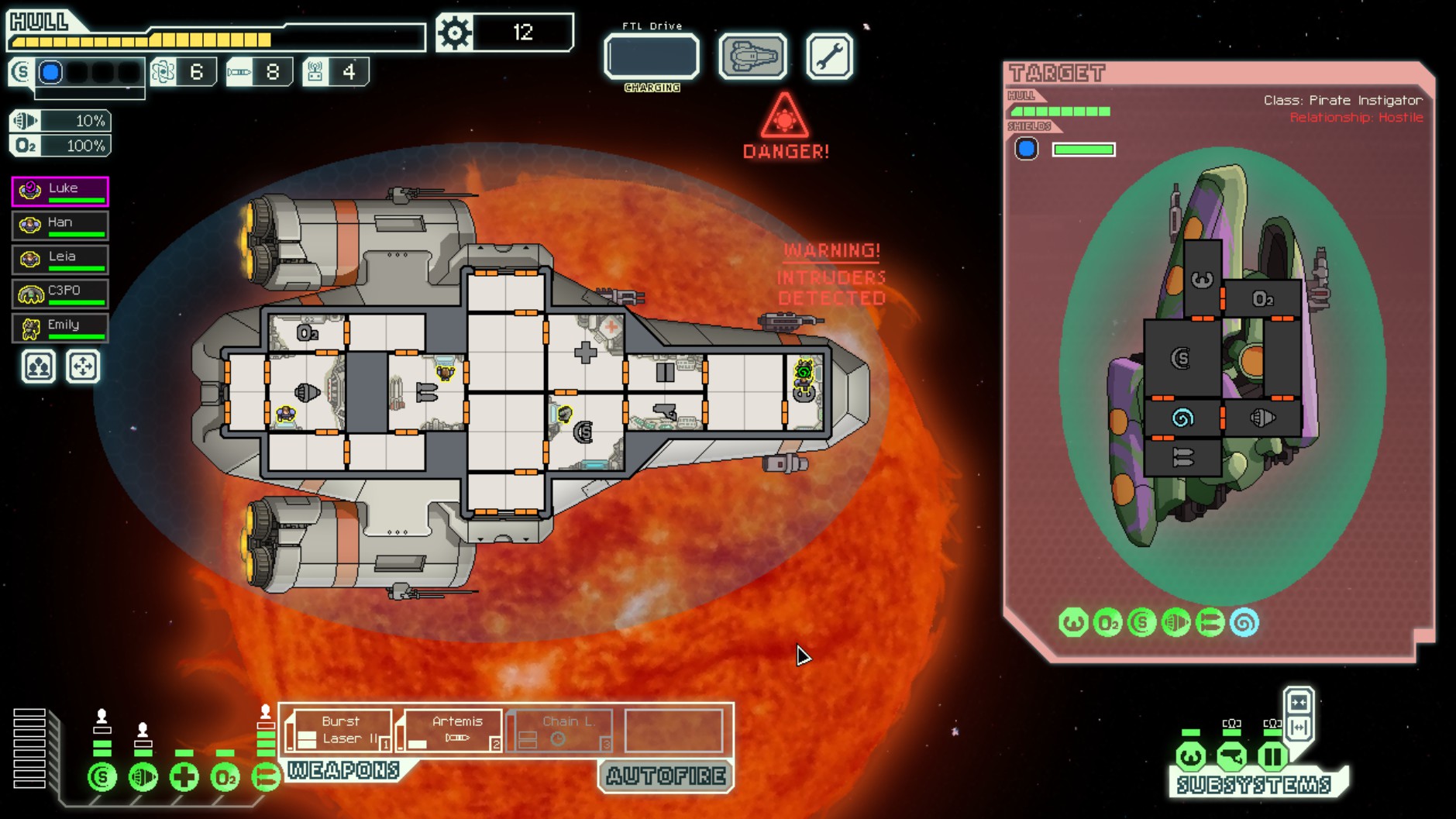 Furthermore, there's plenty of variety in the set of ships. Kestrel ships are intended as all-rounders, but most of the others have an emphasis on a specific aspect of the game: Mantis ships all have teleporters and crews that are good at fighting; Rock ships go heavy on the missiles; and Slug ships make use of less conventional tactics (like the mind control mentioned further up). You'll probably find that you have a favourite playing style (the Stealth ships, which are designed around cloaking and defensive shield drones, are my personal favourites).

There's another thing I like about this game, though. It's easy to learn, but hard to master. It's like chess in that respect: it only takes a few minutes to learn the moves of the pieces, but it takes years to learn how to compete in the game at the elite level. In this game, the basics are really just what I explained above - and the short tutorial level does a good job of recapping anything that I've missed. However, I must have had at least 50 lost games before I won my first one - and, even today, I've won less than 20% of all the games I've played :O : 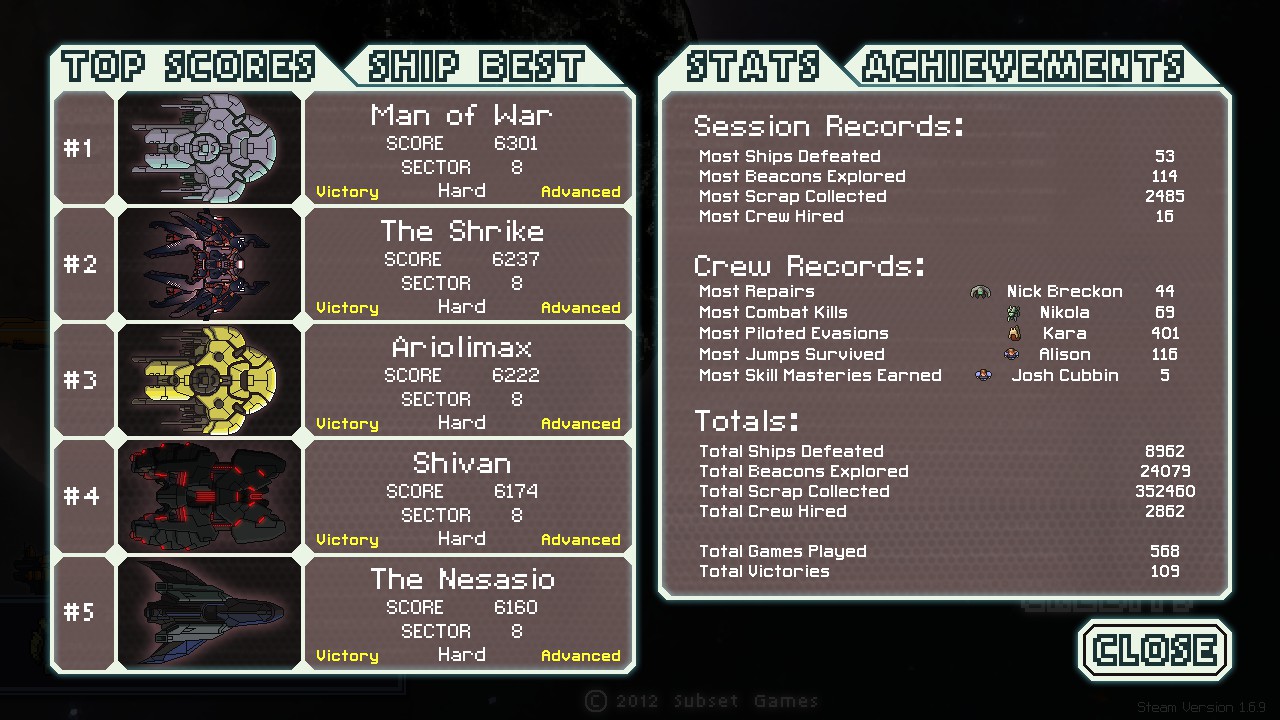 There are a couple of issues I have with the game, though. First of all, while the randomness is good at mixing things up and keeping the game interesting, there are times when it just screws you over . For example, when I had my shields hacked, I was able to knock out their weapons before I got into trouble - but, if that ship also had a strong beam weapon (which is guaranteed to hit once the shields are down), then I'd have been toast . Another issue is that I don't think the weapons are especially well-balanced: lasers are good all-rounders, Flak weapons are good for breaking shields, Beam weapons are good once all the shields are broken, and Bomb weapons are sometimes good for knocking out a specific system. However, the other weapons aren't great at all: ion weapons take too long to get working properly; missiles run out of ammo too quickly (and can be countered easily by Defensive Drones); and fire weapons, while fun to use, just aren't particularly effective. Still, I think most games contain useless equipment that nobody ever plays with, so that's not a massive issue .

Completely subjective score based on no criteria whatsoever: 9/10​
As far as I'm concerned, this is an excellent game: I'd put it somewhere in my personal all-time top 10. It certainly isn't going to be for everyone; however, those who do like it are going to love it, and find themselves replaying it over and over for hundreds of hours .

If anybody's got any questions about this game, or if you've played it yourself and have your own thoughts about it, then let me know !
Click to expand...